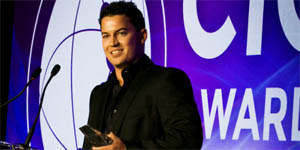 The 10th annual NZ CIO Awards Gala Dinner was held at The Langham in Auckland last evening. The awards, in conjunction with the 2016 NZ CIO Summit, celebrate and recognise individuals and teams who have shown leadership, innovation and foresight in their contribution to ICT and business.

We are delighted to announce that our CEO and Founder of The Instillery, Mike Jenkins, was named the NZ Emerging ICT Leader for 2016.

This year a record number of applications were received demonstrating the vast amount of talent and innovation existing in the New Zealand market. Of the six award categories, The Instillery was named as a finalist in three categories: Emerging ICT Leader of the Year: Mike Jenkins, Best ICT Team Culture Award, Executive Team of the Year (for strategic use of business technology).

With a high calibre of finalists, the judges were impressed with the inspirational line up of finalists and emerging ICT leaders; commenting that they all have a clear vision and talent to make it happen. They noticed the strength of conviction particularly in light of outside influences and international investors wanting to buy in.

“All three were prepared to make the hard calls, build a team of great people around them and drive for results. One leader stood out above the rest, someone who has already built his team and is already a leader in the international arena. He is our winner and that leader is Mike Jenkins.”

The judges were particularly impressed with Mike’s passion and ability to drive disruptive thinking and use it to help emerging kiwi companies excel on the world stage.

“Mike has successfully founded a sustainable and rapidly growing company, built a great culture and is contributing back to the ICT community.”

As the winner of the NZ Emerging ICT Leader for 2016, Mike has been awarded a place on The University of Auckland Business School Strategic CIO Programme.